MAVI DENIZ is a World Leader manufacturer of oil spill recovery systems for the port authorities. The Tier 1 oil spill response equipment will use in Belawan, a port city in Sumatra, Indonesia. Located on the Deli River near Medan, Belawan is Indonesia’s busiest port outside Java. 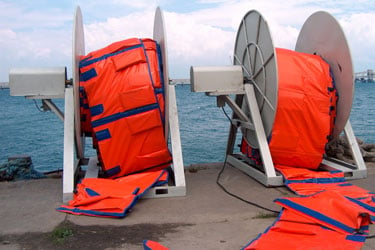 Crude Palm Oil (CPO) has become the main export commodity of the Belawan sea-port following the recent rising demand for the plantation product; in case of an oil spills accident, the equipment will be located in 3 different places for emergency response.

The National Oil Spill Contingency Plan gave the Indonesian government approval in 2007. The lead agency for oil spill preparedness and response is the Directorate General of Sea Transportation (DGST).

A National Team for Oil Spill Response has been established, comprising the Directorate General of Mining and Gas and other government ministries and agencies.

The National Team is responsible for coordinating the implementation of emergency response at sea during major incidents. It also provides legal support to those that suffer financial loss as a result of the spill.